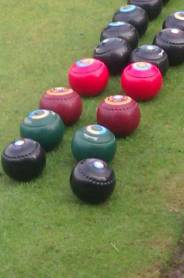 This blog is made up of match reports for Hexham (Elvaston) Bowling Club.  Our main web page is at www.elvastonbowls.co.uk.

On the main site we have all details of the club, fixtures, membership, etc.

For the second year running we opened our Nines League season with a home game against Gosforth. At least this year they came as the previous season’s runners-up, rather than as league champions!

Last year we were in our first year back in Division 1, and intent merely on staying up.  In the event, a close defeat by Gosforth signalled a season which got better all the way, and finished with third place. However, losing our three youngest players has had quite an impact on team selection this year, and so we had other reasons to be apprehensive this time round.

The Fours were up against a very strong rink, and were soon 1-10 down.  A good spell then saw them recover to only 7-12 down, but the opening blitz was matched by a strong finish for Gosforth and the rink lost 8-23.

The Triples also put up a good fight: leading 7-5 after eight ends, they were only one shot down at the half-way point in the game – at which point Gosforth changed tactics (jack length) and never looked back. winning seven of the last nine ends for a comfortable win.

The Pairs seemed to be having some bad luck with wicks or near misses, and were 7-12 down after twelve ends.  But a couple of good ends put doubt in the opposition’s minds, and it was soon 12-12.  Taking a two-shot lead into the last end Elvaston not only protected it but added a single, for a 16-13 win.

So it was two points on the night, just like last year, albeit with not such a good shots difference.  But with a victory unlikely two points was as good as it was likely to be. If you can’t be optimistic at this time of year, you never will be!

We went into the first-round Cup match against Hexham House as holders, but by the end the only thing we were holding was our breath – a close finish saw Hexham House just take the match 2-1 on rinks. Both of the home side’s winning rinks had margins of three shots, and although Brian Elstob’s rink won by a margin of seven it was not enough on the night.  As the footballers say, we can now concentrate on the league…

Two days later we were back at Hexham House for a friendly.  There were six full rinks, and six full tables of a lovely tea afterwards, with a really good atmosphere all round.  A win by about 20 shots overall was some small consolation for the Cup defeat although – of course – the result truly doesn’t matter in these encounters.